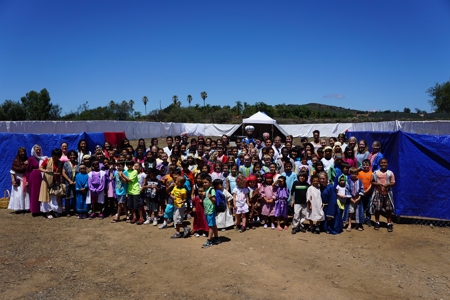 From July 20-24, the Fallbrook Adventist Church held a unique VBS, made from scratch, focusing on the sanctuary and the symbolism within it pointing to Jesus. Children from the community, reaching numbers up to 98, flooded in each of the five days at 9:00 AM to experience a God-filled environment both inspiring and fun. The church's fellowship hall was transformed into the Israelite camp, complete with make-shift tents to house all twelve Israelite tribes. When a child arrived the first day, they were assigned to a tribe according to their age. To top it all off, each child as well as their tribe leaders were distributed a Bible costume. The entire Israelite camp started off each day with singing and a brief introduction to the day's theme-each of which was a section of the sanctuary.
During the course of the morning, the kids went through four rotations that taught, inspired, and entertained them as well as encouraging healthy relationships among peers, tribe leaders, and ultimately Jesus. The climatic stop for each tribe was their trip to the sanctuary-a real-life, 150 feet long, 70 feet wide, almost-but-not-quite 7 foot tall, sheet-covered fence enclosing life-size replicas of each part of the tabernacle. Day one focused on the door representing Jesus, the only way to Heaven, followed by the alter and lavar-including a live sheep and goat whose lives were spared in this case. Then the children were led into the Holy Place and given an interesting and understandable explanation of each piece of furniture. Next they were given a peek of the Most Holy Place and ark of the covenant. The week concluded with a discussion on Heaven. Aaron kept the attention of every "Israelite" with his capturing stories and descriptions, intricate and colorful high-priest robe and ephod, and his acting out of the ceremonial rites that brought one back to Biblical times.
At another rotation the kids were able to interact with each other in various team-building games. Friendships were created within the tribes, and the kids went home each day with stories to tell their parents. One such parent stated, "The children are friendly and the kids beg me to come back each day."
Each day the children were provided with healthy snacks and some refreshing and much needed water at the "Manna" rotation, after the kids had ran a bit of their never-ending energy out. While they took a break, activity packets were provided to be colored, solved, and read. A prize was given to each of them who took it home and finished it. "They are so happy, and they look forward to the prizes and doing what they are asked to do," said one parent. Their activities were not only entertaining, they were also the ideal way to get the kids to memorize the Bible verse of the day, considering that each packet was focused on that particular day's text and theme.
Finally, each tribe had the chance to visit the craft rotation. By the end of the week, the children had completed a mini replica of the sanctuary, adding pieces to it each day, with the exception of Friday when they made their own crowns to remind them of Heaven, where the real sanctuary is located.
"Having a model of the sanctuary was very real for my childrens and you can tell it is sinking into the their hearts," said another satisfied parent. And isn't this the ultimate goal of any VBS? To go beyond the factor of entertainment, and touch the hearts of kids, leaving on each of them an impression of the joy of following Jesus.

"From the one door to the sanctuary representing the one Way to salvation, to the real lamb representing the Lamb of God, to the table of showbread representing the Bread of Life, our hope was that by practically experiencing the various elements of the lifesize replica of the Old Testament Sanctuary the children would see a clearer picture of Christ's love for them," explains Pastor Jeff Harper who helped lead out with this year's VBS. It was heartwarming to see miniature Israelites gathered together after each exciting morning to sing and discuss the day's discoveries. The theme song got louder every day, "Lord prepare me, to be a sanctuary," and with it was the hope that through this special week, these precious kids would learn to live out the song, share it wherever they go, and remember it for the rest of their lives. 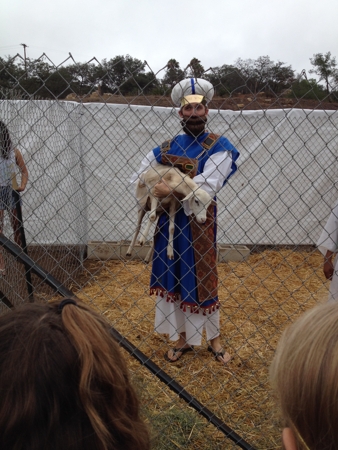